Remembering those who died in the Great War

Forty-four oak trees were planted around the Memorial Field to honour of the 34 Macdonald students who lost their lives during World War 1. The oaks were dedicated in a student ceremony on November 11, 1931. The First Book of Remembrance (1914-1918) and a memorial clock made by Henry Birks and Sons (both now located in the foyer of the Raymond Building) were unveiled November 11, 1933.

The Institute of Parasitology

In 1926, Dean G.S.H. Barton organized an interdepartmental committee, including W. Harold Brittain BSA’11 who would succeed Barton as Dean and VP (1935-1955) and Professor Melville DuPorte*, BSA’13, MSc’14, PhD’21, one of Canada’s foremost insect morphologists,  to consider research on farm animal parasites – specifically poultry, sheep, and swine. The Institute of Parasitology opened in 1932 under the Directorship of noted parasitologist Dr. Thomas Wright Moir Cameron.

Over the years, the Institute has acted as the National Reference Centre for Parasitology in Canada, providing a standard for the diagnosis of human parasitic infections for the Provincial Diagnostic Laboratories. Research at the Institute focuses on the interaction between parasites and their wildlife, domestic animals, or human hosts. Since the mid-eighties, with the advent of molecular parasitology, there have been many exciting and innovative advances, both in the biology and treatment of human and veterinary diseases caused by parasites. Studies have focused on development of new, affordable anti-parasitic drugs to combat parasitic infections such as river blindness or lymphatic filariasis that affects hundreds of millions of Africans.

* internationally renowned entomologist Earnest Melville DuPorte was the first Black Canadian to teach at Macdonald, and the first zoology student to obtain both post-graduate degrees from McGill. He would ultimately become the head of the Department of Entomology. By the time he retired in 1957, he had taught more than half of Canada’s practicing entomologists.

Establishment of the Provincial Seed Farm at Macdonald 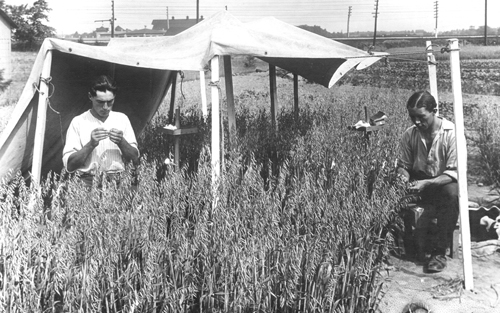 The Provincial Seed Farm, started in 1920 by Emile Lods in Ste. Rosalie, QC, moved to Macdonald in 1932.  Now known as the Emile A. Lods Agronomy Research Centre, the 120-acre farm has been the training ground for some of Canada’s most brilliant plant breeders.

The Seed Farm provided pedigreed seed stocks to Quebec farmers for close to forty years. The farm provided the space for the development of many new varieties of crops that were the mainstay for cereal farmers across Canada for many years. New varieties included corn varieties Quebec 28, Iroquois and Algonquin (grown almost exclusively until 1970), Horton Fall rye, Banner 44 oats, hardy winter wheat Kharkov 22 MC (still considered today as the hardiest of winter wheats), and Byng and Montcalm barley (still the most used malting barley). Breeding also included the new forage crops to improve animal nutrition, as well as the new varieties of swedes (turnips) Laurentian and Frontenac, still being grown today.

Today’s researchers are continuing on the path of excellence set by Macdonald’s early plant breeders and geneticists and are at the forefront of the bioeconomy, carrying on our long tradition of cutting edge research aimed at sustainability, mitigating climate change and the development of novel crops.

The basic mission of the Animal Husbandry department was in the breeding and advancement of livestock breeds, particularly Macdonald’s initial dairy herd of Ayrshire cattle, later augmented by a herd of Holstein-Friesians. At age sixteen, Macdonald Dorothy’s total lifetime production in ten lactation periods was 171,996 pounds of milk containing 7,309 pounds of butterfat. She was the first Ayrshire to pass the 7,000-pound butter fat mark; no other cow of her breed at the time had passed her lifetime production record.