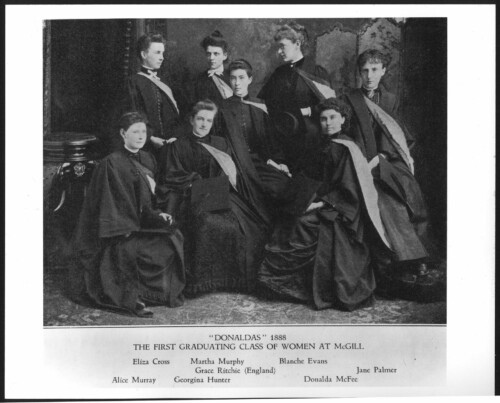 In the fall of 1884, Rosalie McLea, Octavia Ritchie, Alice Murray and Helen Reid made history by becoming the first women admitted to McGill. The four were recent graduates of the Montreal High School for Girls, earning top grades on their exams. With their entrance, McGill also became the first Quebec university to accept women.

The integration of female students was a growing topic of debate at the time. In 1872, Mount Allison University in Nova Scotia became the first Canadian university to do so, followed by Queen’s, Acadia and Dalhousie.

At McGill, the process to admit female students began in 1857 with the establishment of the McGill Normal School, which offered Montreal’s first English-language professional training program for women. The School could not grant university degrees, however. In the early 1870s, McGill professors provided university-level lectures to members of the Montreal Ladies’ Educational Association, an institution co-founded by Margaret Mercer Dawson, the wife of McGill Principal William Dawson.

In 1882, a committee led by Principal Dawson met to discuss the establishment of a co-education system, reaching a favourable decision two years later. Sir Donald Smith (later Lord Strathcona), a Scottish-Canadian banker and railway magnate, donated a substantial sum over several years to fund the transformative endeavour, with the caveat that women be educated separately from men, a common sentiment in the debates around co-education.
The lion’s share of Smith’s donation was invested in the construction and upkeep of Royal Victoria College, which opened in 1899 as a dormitory and educational facility for women. In his honour, the students proudly called themselves “Donaldas,” and their numbers surged.

By 1889, women comprised a third of McGill’s student body. Today the College serves as a mixed-gender residence and much of the original building is occupied by the Schulich School of Music.