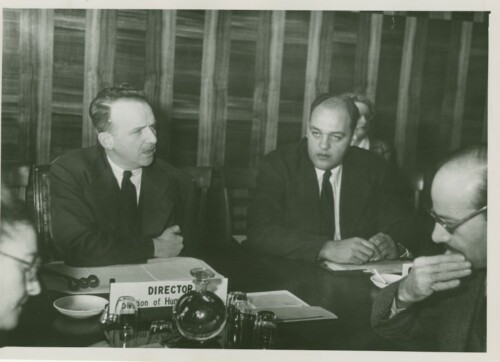 Translated into 321 languages and dialects, the Universal Declaration of Human Rights is arguably the most cited legal document ever drafted by a Canadian. In 1946, John Humphrey, then a Law professor at McGill University, was asked to work with a United Nations Secretariat committee to help the organization draft a statement on human rights.

In providing guidance to the 18-member international committee, Humphrey created a 400-page blueprint that became the foundation of the Universal Declaration of Human Rights, which was also drafted by Humphrey. Committee Chair Eleanor Roosevelt famously called it “the Magna Carta of all mankind.”

For 20 years, Humphrey served as Director of the United Nations Human Rights Division before returning to McGill in 1966, where he served as Professor of Law and Political Science. It was only late in his life that Humphrey’s true contribution to the Declaration was acknowledged (for years, a French delegate was thought to have drafted it). The discovery of a first draft in Humphrey’s handwriting led to his belated recognition and the McGill professor was awarded the United Nations Prize in the Field of Human Rights for human rights advocacy on the 40th anniversary of the United Nations.

Humphrey was also involved in international efforts to investigate human rights abuses in the Philippines, and represented Korean women forced to act as sex slaves to Japanese soldiers in World War Two. A New Brunswick native, Humphrey would remain involved in human rights law for the rest of his career. He believed “there is a fundamental link between human rights and peace” and that “there will be peace on earth when the rights of all are respected.”

Humphrey was made Officer of the Order of Canada and the Ordre national du Quebec in 1974 and 1985, respectively. Several memorials and recognitions have been established in his name around the world––including a plaque unveiled by Nelson Mandela in 1998.