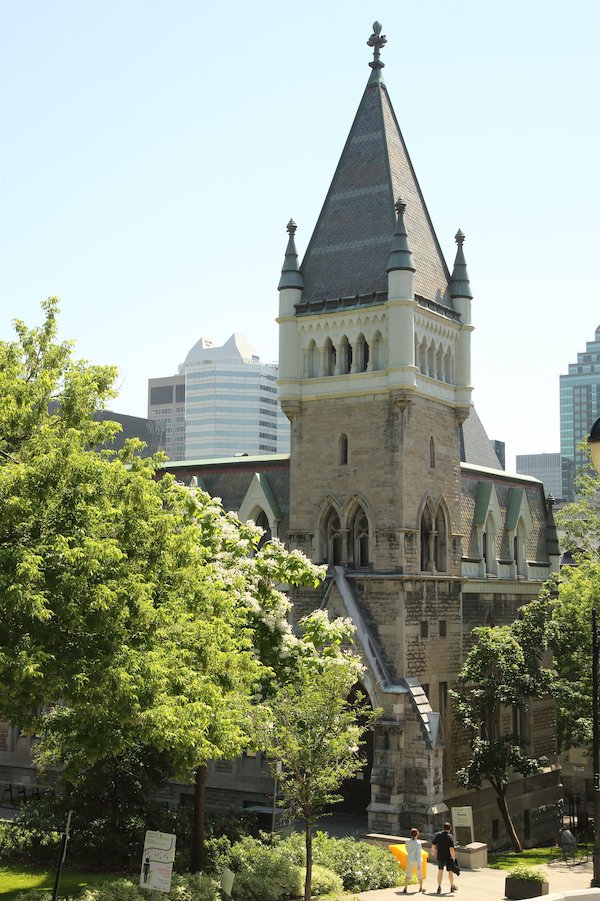 The Presbyterian College of Montreal was founded in 1864 with the intent of establishing an educational and training facility for ministers, yet the college did not have a permanent home until 1871.

By this time, sufficient funds had been raised by the first Principal of the College, Reverend D.H. MacVicar, to hire A.C. Hutchison to design the first part of the College on McTavish Street. The Gothic-style edifice would house the Principal’s quarters, the library, an examination room, several lecture rooms, offices and a lounge for professors, as well as dorms and a large lounge for students. A four-storey tower, which commanded a spectacular view of downtown, was placed in the front of this limestone building. The Gothic theme was emphasized in the details and ornament, the shape of the windows and the steep slate roof.

In 1880, David Morrice, Chair of the Board of Management for the College, donated money to expand the building. John J. Browne was commissioned for the extension, which doubled its space. A convocation hall, a library, a dining hall and more dorm rooms were constructed to the south of the original structure, with the two buildings connected by a corridor and an entrance hall that was recessed from the street to form a courtyard. Two decorative towers were added: one that marked the entrance hall and the other, still visible today, that contained the library. The themes of the older portion of the building were continued and expanded upon with various carvings and details.

In 1961, the Presbyterian College moved to the southeast corner of Milton and University Streets, at which point the old Presbyterian College was given to McGill and it renamed Morrice Hall. Today, the building is used by the Institute of Islamic Studies and the Faculty of Arts.