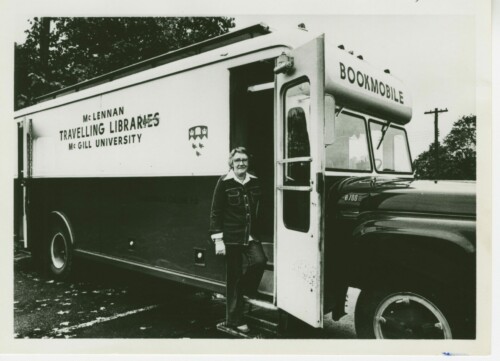 In 1899, Hugh McLennan started the McGill Travelling Libraries, an initiative that aimed to make the University’s book catalogue more available and accessible to rural communities outside Montreal’s urban centre.

Supported by the McLennan family and administered by McGill, the travelling libraries operated initially in rural Quebec and were run almost exclusively by women. The service proved so popular that it soon went far beyond provincial boundaries. Under the system, boxes of about thirty varied books were shipped all over Canada to places where no libraries and few books existed. In these remote areas, books were seized eagerly by many of the residents, and passed from one to the other, before being shipped back to be replaced by a new selection. The travelling libraries continued operating until about 1976, with contributions from the Quebec government.  Beyond the traveling library, Hugh McLennan’s other accomplishments – as not only a Professor and renowned novelist, but the recipient of five different Governor General’s Awards – cement his legacy of meaningful contributions to the McGill community and to the world.