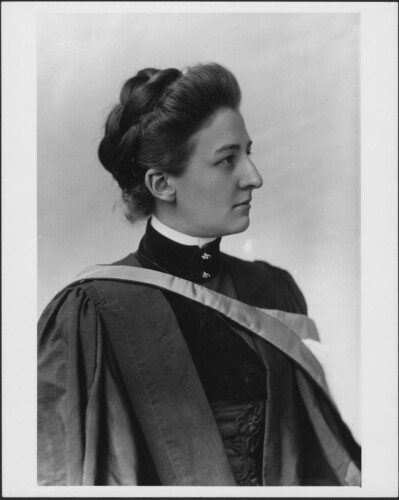 Carrie Derick’s long affiliation with McGill, from 1862 to 1941, culminated in her becoming the first female full professor at any Canadian university.

Born in 1862, Derick was already teaching at the age of 15, and later attended McGill’s Normal School, now known as the Faculty of Education, graduating in 1881. After serving as the principal of a Montreal grammar school, she returned to McGill for her BA, graduating in 1890.

She remained with the Department of Botany as a lecturer, and her research was crucial in the early development of Genetics Studies at McGill. Derick became the department’s unofficial interim head between 1909 and 1912, filling in for the ailing official Chair, and was appointed Professor of Comparative Morphology and Genetics in 1912. Her active leadership in this field, as well as in the Local and National Councils of Women, with particular attention to social reform, continued until her death in 1941.