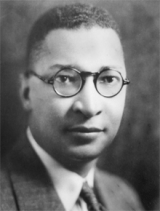 Born and raised in Kingston, Jamaica, Kenneth Melville graduated at the top of his class in 1926, earning the Holmes Gold Medal. In 1930, he has awarded a postdoctoral fellowship at the prestigious Institut Pasteur in Paris.

An internationally respected pharmacologist, Melville was among the first to show that adrenaline is not a sympathetic neurotransmitter. Over nearly half a century, Melville penned more than 80 peer-reviewed scientific articles, and in 1953 became Chair of McGill’s Department of Pharmacology and Therapeutics.

Throughout his career, Melville served as a respected mentor to students, a leader in Montreal’s West Indian community, and an advocate for civil rights. In 1960, Melville was arrested with seven other physicians attending a medical congress in Atlantic City after the cafeteria refused to serve them because they were Black. Melville’s memory lives on at McGill through the Melville Fellowship in Pharmacology, and the Dr. Kenneth Melville Black Faculty and Staff Caucus.