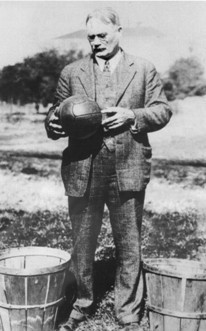 In 1891, while working at a Massachusetts YMCA, James Naismith, BA’1887, was ordered to invent an “athletic distraction” for rowdy kids trapped indoors during the harsh winter.

His boss gave him two weeks. Naismith wanted to create a game that was safe and fair for all players. Noting that athletes tended to get battered close to where the scoring took place, Naismith placed his goal high out of reach. To score, players had to throw a soccer ball into a peach basket suspended 10 feet in the air. Naismith didn’t live long enough to lace up a pair of Air Jordans, but he did get to see his humble creation become an Olympic sport.