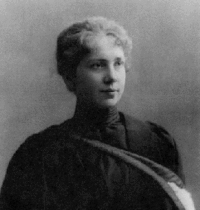 Born in Exeter, Ontario, in 1876, Harriet Brooks entered McGill in 1894 at a time when women had been welcome at the University for less than a decade. In 1901, Brooks became the first woman to earn a master’s degree from McGill, and the first Canadian woman to receive a master’s in Electromagnetism.

After working with J.J. Thomson at the famed Cavendish Laboratory in Cambridge, England, Brooks returned to McGill in 1903 to work with Ernest Rutherford. Her breakthroughs at the University played a critical role in Rutherford’s discoveries, which led to him being awarded the Nobel Prize in 1908.

Brooks later moved to Barnard College in New York City to tutor physics. In 1906 she accepted a role at the Curie Institute, where she worked with both André Debierne and Marie Curie. Brooks was the first person to discover that one element can change into another. She was also among the early discoverers of radon and was the first to attempt to determine its atomic mass.

The Canadian Encyclopedia recognizes that Brooks’ contributions “paved the way for the entire modern fields of nuclear physics and chemistry, as well as modern medical applications of nuclear medicine, including many cancer therapies.”