As the number of cases of AIDS grew exponentially in the 1980s, AZT was the only option for suppressing HIV. The drug, however, had a downside: patients suffered from side effects such as bone-marrow damage, anemia, and extreme pain. Additionally, a large percentage of patients grew resistant to it after just a year of treatment. 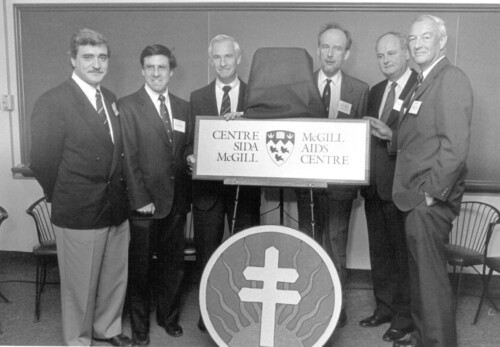 Organic chemist and McGill chemistry professor Bernard Belleau (PhD’50), set off to find an alternative to the damaging drug.

Through research on sugar derivatives, he succeeded in synthesizing 3TC (also known as lamivudine), a compound that stunts HIV’s tenacious rate of replication. The discovery is said to have saved millions of lives and changed AIDS from an automatic death sentence to a chronic disease.

Together with Quebec scientists and entrepreneurs Dr. Francesco Bellini and Dr. Gervais Dionne, he co-founded BioChem Pharma, and worked on developing and commercializing 3TC. The trio teamed up with the lab of the late Mark Wainberg (BSc ’66), who was Director of the McGill University AIDS Centre. Wainberg identified the drug’s anti-viral properties and proved it could be highly useful for patients suffering from HIV. Today, 3TC remains a cornerstone of combination HIV/AIDS infection therapies.

Wainberg, Belleau and Bellini were invested into the Order of Canada as Officers.