The natural sciences had their own needs distinct from those of the humanities and social science departments, but they did not want to break away from Arts entirely. The solution reached in 1931 was to rename the Faculty the Faculty of Arts and Science, with two deans sharing the leadership, one for Arts and one for Science. This awkward arrangement, with its potential for conflicting and overlapping jurisdictions, lasted only until the end of the decade. In 1939, the Faculty was divided into four groups—Humanities, Social Sciences, Physical Sciences, and Biological Sciences—under a single dean of Arts and Science.

The changes during the lifespan of the Faculty of Arts and Sciences were considerable, reflecting the expansion of higher education, the development of disciplines, the growth of ethnic diversity in Montreal, the Quiet Revolution in Quebec, and the political and social ferment of the 1960s. Protestant, anglophone McGill was forced to adapt to new realities. After World War I, when the number of students registering their religious affiliation as Jewish rose to 25 percent in the Faculty of Arts, the fear of diversity provoked McGill’s authorities to demand higher matriculation standards from Jewish students, halving the percentage by 1939. But after World War II, the diversity was increasingly embraced.

The Faculty had run a French Summer School since 1904—the first of its kind in Canada—immersing students in French language and culture through lectures, theatre, church, and concerts. But only with the onset of the Quiet Revolution did Quebec language and culture begin to receive sustained attention. In 1963, the French Canada Studies Program was set up to promote a better anglophone understanding of French-Canadian history and culture. Such measures were not sufficient to prevent Opération McGill Français and a 10,000-strong demonstration in March 1969 in front of the Roddick Gates. But, partly in response, further reforms followed, including the opening of the French Language Centre in 1970 to provide for students and members of the professions wishing to practice in Quebec. 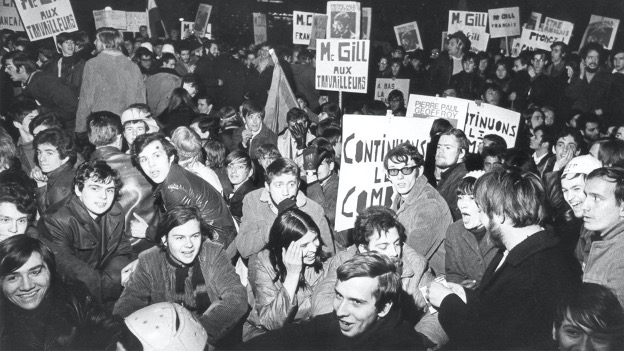 Disciplines concerning themselves with cultures other than British and French expanded vigorously. In the humanities in the 1950s and ‘60s, the Departments of Russian and Slavic Studies, East Asian Languages and Literature, and Linguistics; the Jewish Studies and African Studies programs; the Institute of Islamic Studies; and the Centre for Developing Area Studies were established. The social sciences saw changes as well: as disciplines further self-defined, they separated into distinct departments. The Department of Economics and Political Science split into two as did the Department of Sociology and Anthropology. The classical qualification was finally abandoned in 1967, meaning that the Department of Classics was liberated from the need to teach elementary Latin to large classes of resentful students. And the Faculty grew in size. Between 1950 and 1970, the number of students in the Faculty of Arts and Science increased from 2,500 to 6,000.

Such numbers could no longer be squeezed into the Arts Building. The solution was the construction of the Stephen Leacock Building (named after the humorist and William Dow Professor of Political Economy at McGill)—one of the many new structures across campus put up during the massive rebuilding of 1960-75. It was built between 1962 and 1965 by the architectural firm ARCOP on the site of the McGill Observatory and half of the Presbyterian College (the remaining half is now Morrice Hall). The Arts Faculty has repurposed or partially occupied other buildings over the decades, but its core activities still take place in the Arts and Leacock Buildings and their connecting, glass-walled corridor.

The 1960s also saw the introduction of more collegial forms of governance (including in Arts Faculty and departmental meetings) and—once the Students for a Democratic University gained control of student government and publications like the McGill Daily from the middle of the decade—an unprecedented bout of student activism, spearheaded by Arts students. They organized repeated sit-ins of departmental and Board of Governors’ meetings and occupations of the Principal’s office, variously protesting against the Vietnam War, fee increases, and military expenditure. One concession was the election of students to Senate in 1968. Another factor that served to assuage student radicalism was the opening of the McLennan and remodeled Redpath Libraries in 1969/70, significantly improving library facilities.