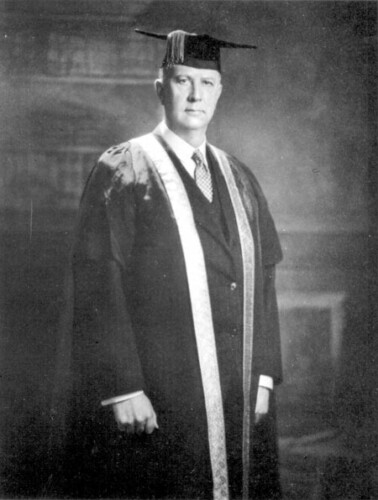 McGill’s Board of Governors surprised everyone in 1919 by choosing Sir Arthur Currie as the University’s eighth principal. Academically, Currie boasted few qualifications. His only diploma was from his high school in Adelaide, Ontario, and his civilian career comprised just a few years as a schoolteacher in Victoria, British Columbia, as well as a moderately successful stint in the insurance business. However, Currie turned out to be an inspired and wildly popular choice.

Currie’s wartime career had made him a national hero. He had commanded Canada’s troops on the battlefields of Europe during the First World War, transforming a ramshackle group of volunteers into one of the most effective forces on the Western Front.

For 13 years at McGill, Currie’s common sense and pragmatism guided the burgeoning University through a period of rapid expansion and change. During his tenure McGill added a new biology building, expanded the Redpath Library, reconstructed the Arts Building and erected the Roddick Gates. New Departments of Psychology and Sociology were opened, as well as the McGill School of Social Workers and the Faculty of Music. Currie also worked with Wilder Penfield to build the Montreal Neurological Institute (MNI). He died in office in 1933.