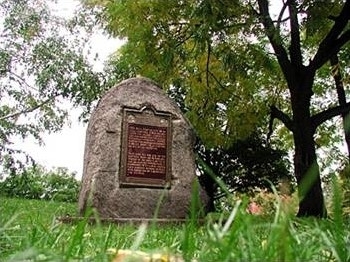 Hochelaga was an Iroquois village which was likely located in the vicinity of the University. In 1920, Hochelaga was deemed a National Historic Site of Canada. A memorial stone, known as the Hochelaga Rock, was placed on Lower Field in 1925 by Parks Canada to commemorate the Iroquois village that stood close to the McGill campus. Its plaque reads: “Near here was the site of the fortified town of Hochelaga visited by Jacques Cartier in 1535, abandoned before 1600. It contained 50 large houses, each lodging several families who subsisted by cultivation and fishing.”

McGill began to consider moving the monument to a more visible place on campus in 2012, and with the 2017 release of the Provost’s Task Force Report on Indigenous Studies and Indigenous Education, it was moved to a more prominent spot next to the promenade leading from the Roddick Gates to the Arts Building. The relocation was marked with a ceremony at the Hochelaga Rock’s new site.